We began as a structural move specialist and continue to thrive as an innovative and conscientious pioneer of structure relocation. Some of our most prestigious awards were earned by performing feats like the relocation of the Fairmount Hotel, which weighs over 3 million pounds.

We recycle all of the typical products normally recycled by industry leading companies. However, Emmert has taken its recycling methods to a new dimension by not only saving precious landfill space, but also by recycling items not typically seen as recyclable.

What others see as an old, unwanted building, we see as an opportunity. By transplanting these buildings to new locations, and updating or remodeling them, we are able to help provide quality housing to literally hundreds of individuals and families.

Since beginning this initiative, Emmert has saved more than half of a billion dollars in building materials, demolition, labor, and landfill costs. This initiative has also led to untold hundreds of renovation contractors finding employment by performing the salvage and remodeling work.

This recycling program enables individuals and families to purchase these homes, move them to their lot, and go about the renovation work themselves, often with technical, financial, or subcontract assistance from Emmert. This process has helped hundreds of families realize their dream of owing their own home. 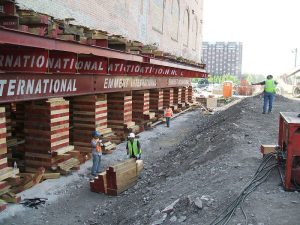 The project began in 1996 for expansion of the Federal Courthouse and it was determined that instead of demolishing Odd Fellows Hall, the building would be saved by moving it across the street. Using a latticework of steel beams and jacks, Emmert lifted the 117-year-old, five million-pound building eleven feet off its foundation in preparation for its move across the street. The building was first rotated 180°, then pushed across the street, and lowered onto its new foundation. 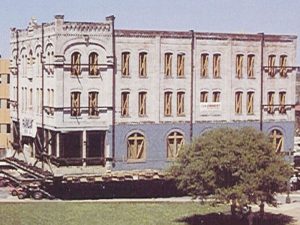 Built in 1906 this downtown San Antonio hotel is a historic landmark.

In 1984 the city of San Antonio opted to move the entire structure to a new home next to La Villita National Historic District rather than tear it down. On April 4, 1985 the 3.2 million pounds brick and mortar building was lifted and moved five blocks to its present location. The move was national and international news featured in more than 30 foreign countries. The Guinness Book of World Records noted it as the largest structure ever moved on wheels. The hotel reopened on September 5, 1986 with an addition to the original structure. 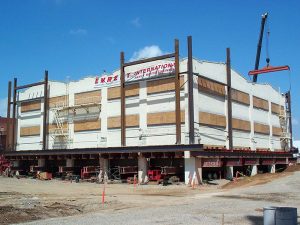 On September 22, 2003 the Showley Bros. Candy building was moved to make room for the new baseball park in San Diego. Moving the Candy Factory was an ambitious undertaking. The 100 foot by 100 foot, un-reinforced brick building, weighing 3 million pounds, was moved one block east of its present site, requiring over 42 hydraulic dollies and an intricate cable winch system. 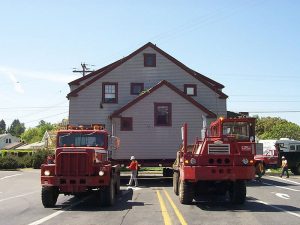 What others see as an old, unwanted building, we see as an opportunity. By transplanting these buildings to new locations, and updating or remodeling them, we are able to help provide quality housing to literally hundreds of individuals and families. 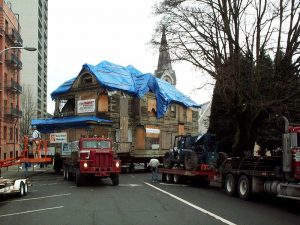 Emmert International relocated the Simon Benson House in downtown Portland. Originally on the corner of SW 11th and Clay in downtown Portland it was condemned by the city. In 2000 the house was moved to its new location on the Portland State University campus. The house has been completely restored and is on the National Historic Registry. 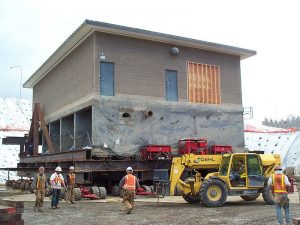 Emmert International relocated the 3,500 ton Tacoma Narrows Pump Station to make room for the expanded Tacoma Narrows Bridge. The pump house is used for water distribution in the area so the move had to be perfectly timed with the water bureau to limit any disruptions in service.

HAVE A HEAVY LIFT PROJECT?

TO YOUR LOGISTICS, ENGINEERING AND HEAVY-HAUL CHALLENGES